Last month we highlighted, two of our FLATE awardees (Ken Jurgensmeyer and Russ Henderlite); this month the spotlight is on Aubri Hanson, recipient of the 2014 FLATE Manufacturing Post-Secondary Educator-of-the- year award. The Award recognizes a community college, or technical school educator for outstanding contributions to manufacturing and/or engineering technology education. Hanson who is the assistant professor of technology at Gulf Coast State College in Panama City, FL joins a distinguished array of educators who have received the award. Nominees demonstrate a proven impact on technology education at the local, state, and/or national level, and represents FLATE’s commitment to support and recognize post-secondary faculty who make significant contributions to the education and training of today’s advanced manufacturing workforce.

Hanson received the Award during the awards luncheon at the Annual Manufacturers’ Association of Florida Summit on December 3, 2014 at the Sandestin Golf and Beach Resort in Destin, FL. “Manufacturing is the bedrock of our national economy and there are several reasons I think manufacturing education is important” said Hanson.  Even before being nominated for the Award, Hanson had already made a mark as a dedicated and outstanding educator.

Hanson is an active member of the International Society for Automation, and serves as the technical 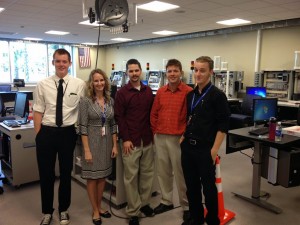 program Chair for the International Instrumentation Symposium. Hanson also played a leading role in aligning GCSC’s engineering technology curriculum to the FLATE statewide A.S.E.T model during her first year as full time college faculty, and added Mechatronics certificate at GCSC. During her tenure at GCSC, Hanson has hosted multiple recruitment events, local television spots, tours and events to promote manufacturing education and women in technology. Enrollment into the engineering technology program at GCSC also increased over 400% during her tenure as GCSC ET program manager, and GCSC boasts of 95% job placement for ET graduates.

for industry and educators to build a sustainable partnership. “The USA must be a producer of goods, as well as a consumer in order to maintain our place in the global marketplace” said Hanson. Manufacturing education, she says, bridges the gap between the engineers and the assembly line workers. Given her stance, Hanson has established numerous partnerships with local industry who currently serve as advisors for GCSC students and graduates. “It is vital that we train the next generation to avoid losing those jobs to other parts of the world, to fill the skilled labor positions that are already available, and to lower the national unemployment rate.” She worked directory with Florida TRADE grant to ensure success of common initiatives and established 2+2 partnership with FAMU to allow GCSC graduates to obtain B.S.E.T degrees without having to leave Panama City. “We all must recruit, educate, encourage, and employ the individuals who have always and will continue to form the backbone of our nation’s economy” said Hanson.

2014 marks the eighth year of the FLATE awards. Since the implementation of the program in 2006, FLATE has recognized 14 educators at the secondary and post-secondary educational level, and seven industry partners. For more information on Aubri Hanson email her at ahanson@gulfcoast.edu, (850)769.1551 ext. 4868, or visit http://etdegree.org/gulf-coast-state-college.
No Comments
Categories : Uncategorized