“Tallahassee, FL (AP) -November 26, 2012- Gov. Rick Scott wants Florida’s community and state colleges to develop bargain four-year degrees costing no more than $10,000. Scott made his proposal Monday in the form of a challenge before an audience of elected officials and college and community leaders at the Clearwater campus of St. Petersburg College.

The 28 colleges in recent years have begun offering a limited number of four-year degrees, but the bulk of their students are in two-year programs. Most of Florida’s bachelor’s degrees are produced by the state’s 12 public universities. The four-year tuition there is about $24,000.

Scott’s challenge comes just three weeks after his task force on state higher education reform recommended that Florida’s 12 universities be allowed to increase tuition rates that are among the lowest in the nation. 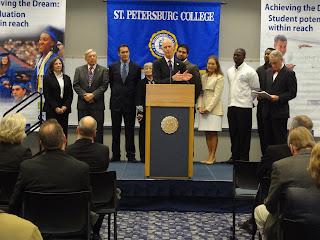 A challenge to be sure, but the Governor’s selected site to make this major education policy announcement together with the groups invited to stand with the Governor during the announcement was strategic and summarized in the photo. Standing to the far left of the Governor, in this photo, is the president of St. Petersburg College, Dr. William Law, and on the Governor’s far right are two of the Principal Investigators for FLATE, Marilyn Barger and Brad Jenkins. Dr. Law, as president of SPC, is very familiar with costs and operations of a major Florida state colleges and said that SPC would be taking on this challenge. He administers extensive A.S. and B.S. programs and has a key focus on technical manufacturing degree programs. Dr. Marilyn Barger, P.I. & Executive Director of FLATE and Brad Jenkins, director of engineering technology degree at SPC and FLATE’s Co-P.I., as members of FLATE’s leadership team, have been involved in the restructure of the Florida, Department of Education approved engineering technology education pathway since 2006.

FLATE designed, developed, and delivered to FL DOE an A.S. engineering technology degree is one model of the “Florida Plan” for implanting and managing A.S. degree programs. The ET degree with its articulation by industry certification mechanismsnd valued by industry offers specialization options soon to be articulated to their own technical certifications, dual enrollment opportunities, options for experiential learning stands ready for the challenge at any Florida state, or community college. “FLATE’s expertise resides in our knowledge and experience in educational structure options, many of which support key elements that a ‘bargain’ degree will require” Dr. Barger said.