The mixture of two pure liquids creates a third liquid as well as a unique vapor that is generated by that liquid. These binary liquid diagrams are great for really showing students how to read multiple information graphs. The common error when reading this diagram is the presumption that the answer is obtained at the ordinate value intersection with the abscissa at 50%. The actual vapor content is obtained by reading up at 50 % “Essence of Pearl” line until it intersects with the Bubble-point curve for the boiling point of that mixture and then read along the horizontal line at that temperature to determine the % “Essence of Pearl” in the vapor about that boiling liquid mixture at the Dew-point curve intersection. This puzzle is a great way to end a discussion about mole fractions of mixtures. It is also a way to emphasis that just because the liquid is 50% of each of its two liquid components, the vapor of that mixture is not also 50% of each component. The fact that a liquid mixture can be 50% of each type of liquid but the vapor has much more of one of the liquids molecules is a hard idea for students to accept but a critical concept in understanding distillation.

1) A boiling liquid made from a 50% mixture of both liquid ingredient produced a perfume that has a vapor that contains 50% “Essence of Skunk” and 50% “Essence of Pearl”. Answer: NO 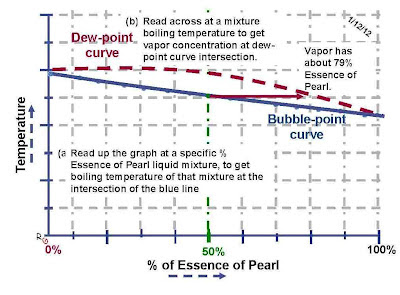