A technician has measured the boiling points of various liquids made by mixing different amounts of two “we-sell-smells” company secret perfume liquids. The 1st measurement was the boiling point of 100% pure “Essence of Skunk” the last was for 100% “Essence of Pearl”. 14 other liquid mixture boiling points are shown on the bubble-point curve. The technician also determined the percent of “Essence of Pearl” in the vapor just above each boiling mixture. That percent vapor (gas) data is shown as the Dew-point curve. The technician knew that the smell of a liquid drop of a perfume comes from the gas just above that liquid drop. Now, the technician knows a lot more about the behavior of the two secret perfume liquids when they become liquid mixtures with different percentages of “Essence of Pearl”. For example:

1) A boiling liquid made from a 50% mixture of both liquid ingredients produced a perfume that has a vapor that contains 50% “Essence of Skunk” and 50% “Essence of Pearl”. Yes or No.

Submit your answers below the blog post, or on http://www.fl-ate.org/. 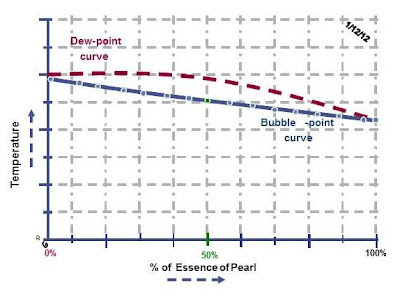