Sound of Music from the Himalayas

In a tiny town, far removed from the Austrian alps, the blue-ridged hills are resounding with the music of Mozart. Nestled in the lap of the Himalayas, far from Salzburg, in the Himalayan town of Kalimpong, is Gandhi Ashram School—a Jesuit school committed “to making a difference in the lives of the poorest of the poor.” 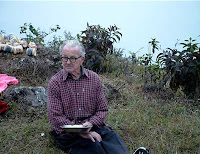 It all started in 1980, when the Late Father Edward McGuire, a Canadian Jesuit priest came up with the idea of using music to impart education to children of local “coolies” and subsistence farmers with meager income. He chanced upon this idea when he saw first-hand, while working at another regional school, the remarkable effect music had on the local children. He knew immediately good education without fees, with music introduced as part of the curriculum was their ticket to a new and more meaningful life. Thereafter, Fr. McGuire hired a violin teacher, bought eight violins from a music shop in Calcutta, and in 1993 with guidance from his supervisors started Gandhi Ashram School, named after Mahatma Gandhi—a renowned leader championing the rights of the downtrodden. The rest, as they say, is history.

Today Gandhi Ashram is a reflection of McGuire’s biblical beliefs “to give life and to give it abundantly.” Fr. Paul D’Souza, who has taken over the reigns since the passing of Fr. McGuire in 2005, says the school’s approach to education is multi-faceted. Its vision is rooted in Jesuit education “that aims to assist in the total formation of each individual, emphasizing life-long openness to growth.” D’Souza, who currently serves as the director, says the school is committed to continuing McGuire’s vision “to give a hopeful future to poor children who have been suffering, as their families have for generations, from poverty, malnutrition, and lack of educational opportunities.” The school’s primary focus is on providing quality education that will enable each student to discover his or her talents/potential. Gandhi Ashram School is open to students from all faiths, does not discriminate on the basis of religion, and fosters tolerance and empathy towards others.

The school currently has 14 teachers, two of whom are full time music teachers and alumni of the Ashram, and is comprised of 300 students, ranging from grades K-8. Admission is based on three factors: 1. economic poverty 2. social poverty/marginalization (lower castes, tribals/indigenous people) 3. When everything is equal, preference is given to a girl child. The unique feature of the school also lies in its training in stringed instruments which include the violin, viola, and cello. Training starts in the first grade when every student learns how to play an instrument starting with the recorder, with a select group of students being taught how to play the piano.

Music is indeed central to the education at Gandhi Ashram. The school follows the Indian Certificate of Secondary Education board curriculum, and makes every attempt to ensure “all-round growth and development, as well as enable students to keep abreast with innovations in education.” Students are taught English, mathematics, science, social studies and the local vernacular language, Nepali. The school also has a choir, an Indian classical dance club, art club, literary and theater club. On weekends, the school offers training in martial arts/Tae Kwando, volleyball, basketball, and soccer which is the sport of choice among many students.

Not surprisingly, the school has been highly successful in making waves on a local, national as well as international realm. Kushmita Biswakarma, an alumna who was adopted by a German family six years ago, is a current member of the Bavarian Youth Orchestra and an accomplished musician who won a scholarship to study music at the Music University of Nuremberg, in Germany. Added to its roster of distinguished alumni are three students who have been hired by a reputed music academy in Mumbai, India; whilst others are music teachers in the neighboring country of Bhutan. Former students have also been chosen to become members of the India National Youth Orchestra that consists of the best musicians from all over India.

Over the course of years, a number of students have also travelled to Europe and Japan to attend workshops, or on concert tours. In India, Gandhi Ashram’s senior orchestra has performed in metropolitan cities like Delhi, Kolkata and Mumbai. Outside of making their mark in the musical arena, a few female students have also been trained as nurses, or have pursued post graduate degrees in business administration, social work, hotel management in renowned universities in India.

Although Gandhi Ashram continues to make a positive impact in the lives of underprivileged children, the school currently faces severe challenges that fall largely under two categories. First, maintaining creative fidelity in terms of developing the founding spirit and ideals of the Ashram, and secondly sustainability and financial stability. Since most of the students are from very poor families, students are not charged any tuition fees, or fees for books and stationery. Additionally, all educational expenses of students who graduate from the Ashram and transfer to well established schools in the area including the cost of transport, meals, books, uniform and basic medical care, are incurred by Gandhi Ashram. 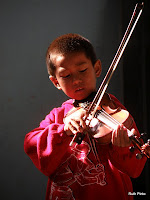 These have undoubtedly placed a heavy burden on the school’s financial reserves. Given an increase in enrolment every year, there is also an immediate need for additional space. The Ashram also does not receive any Government assistance/funding, and relies heavily on volunteers and donors to uphold some of its monetary as well as personnel needs. Then too, D’Souza says “the effort to find means to bring these children out of their poverty into the new world of modern India is a challenge we feel we cannot refuse.” To address this and as part of the solution, the administration is trying to get the community more involved. The school is trying to establish endowment funds to help pay teachers’ salaries, bear the costs of maintenance, and uphold the children’s feeding program which provides two free meals to all students. Contingent on securing these funds, the school hopes to upgrade to higher secondary level, and relocate the entire school, which suffered structural damages following a massive earthquake in 2011, to a new campus.

In all of this, the school remains firmly committed to its mission. In an effort to introduce new pedagogical methods, it offers on- the-job-training and workshops to teachers. The school also plans to expand its music program, by introducing other instruments especially the Indian musical instruments, dance and vocal training.

Moving forward D’souza hopes Gandhi Ashram will continue to serve as a beacon and model of education—one that strives to create an environment to help each student evolve as persons with a sense of individuality as well as a belief in the values of community. “We are passing through a period of planning and development which invites us to look to the future with hope” says D’souza. The possibilities for more work/improvement seem to be boundless, but “it is encouragement enough for us to dare to dream the impossible dream.”

For more information on Gandhi Ashram, or to donate/sponsor a student visit www.gandhiashramschool.com, or contact Fr. Paul D’souza at pauldsj64@gmail.com. You can also find them on Facebook at www.facebook.com/gandhiashramschool .