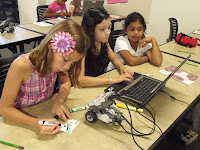 Summer is a time for kids to have fun, to build, to explore activities that they might not have had time for during the school year. While science and mathematics may not be a favorite summertime activity for all, robots are a sure hit and a must-have for all kids. Just ask Mahsah Iranipour, a seventh grader at Liberty Middle School in Tampa. Iranipour can hardly contain her excitement and thrill for robots. “They (robots) are just too cool. I like them because they are fun to watch, and you can program them to do what you want them to do.”

As with Iranipour, love for robots is common among the next generation of kids who are simply fascinated by technology. Iranipour was one of 20 girls who attended the ALL Girls Robotics camp offered by FLATE—the National Science Foundation Center of Excellence in manufacturing at Hillsborough Community College in Brandon. The week-long camp, which has been offered for a third time in a row, was held in June, and designed to capture the interest particularly of middle and high school girls by following the current trend of robotic applications used throughout the entertainment media.

“Today’s kids are tomorrow’s technologists” said Dr. Marilyn Barger, P.I. and executive director of FLATE. “As technology becomes increasingly important in today’s world, FLATE is providing the tools that will not only help kids create technology, but understand and use it.” At the camp students learned how to reconfigure LEGO MINDSTORMS robots and program them to follow specific commands, be part of robotic team challenges. Students also learned design techniques utilizing software programs, watched operation of a 3D printer to produce prototype parts, and enjoyed a delicious treat of ice cream while visiting the high tech manufacturing facility of Publix Dairy in Lakeland, FL. 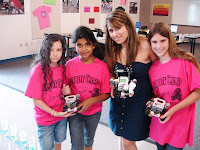 “My favorite part was building the robot” said Haylee Bullington, a 6th grader at McLane Middle School in  Tampa. Bullington who has always liked science and math, says building the robot was complex, but it reiterated her passion for mechanics and “building stuff” in general. To that effect, the camp was successful in developing a knowledge base of modern manufacturing, robotics design and programming. Ivonne Pinzon, a volunteer robotics technologist at the camp was highly impressed particularly by the “investigative” aspect of the camp. Pinzon who is currently on an educational exchange program from Santo Tomas University in Bogota Colombia says the camps are a perfect way to capture children’s interest in STEM/robotics, and help them be inquisitive about how “stuff works.”

Curriculum for the camp comprised of a mixture of Lego educational materials that are integrated with Science, Technology, Engineering, Mathematics (STEM) subjects and modern manufacturing, and were conducted in a competitive problem solving environment that promoted teamwork. “It excites me to know that in the future robots will play an important role in performing everyday tasks that humans do right now” said Nakssie Dickerson a 6th grader at Williams IB Middle School. She says the fascinating part about robots is that humans get to program robots to do what they want them to do using STEM concepts. 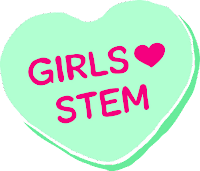 Indeed the “All Girls” robotics camp served as an effective vehicle in breaking stereotypes about women,  robotics and engineering, and educating girls about STEM, and motivating them to pursue STEM based careers. “It showed students how STEM can be fun and interesting” said Pinzon who played an integral role in the camp in terms of trouble shooting problems with the robots and helping campers understand the basic principles of programming. “As a student the most important thing is to stay focused, be inquisitive about new things, and investigate. Try to study, investigate and build a strong future” Pinzon said.