Posted by SystemAdministrator
The Problem
A technician has measured the boiling points of various liquids made by mixing different amounts of two “we-sell-smells” company secret perfume liquids. The first measurement was the boiling point of 100% pure “Essence of Skunk”. The last liquid measured was 100% “Essence of Pearl”. Fourteen other mixture boiling points are shown on the blue curve (the bubble-point curve).
In addition, the technician used a gas chromatograph to determine the percent of “Essence of Pearl” in the vapor just above each boiling mixture. That percent vapor (gas) data is shown as the red dotted curve (Dew-point curve). The technician knew that the smell of a small liquid drop of a perfume comes from the gas just above that liquid drop. Now, the technician knows a lot more about the behavior of the two secret perfume liquids when they become liquid mixtures with different percentages of Essence of Pearl.
For example the boiling point of 100% Essence of Pearl liquid is higher than the boiling point of 100% Essence of Skunk. YES or NO.
Points for discussion
The mixture of two pure liquids to create a third liquid is extremely common. The binary systems plot below provides information about the concentration of each component in each liquid in the liquid mixture as well as the concentration each component of in the vapor of the mixture.  The idea that a liquid has a vapor may be new to your students.  Perhaps you can start with the word gas and the properties of a gas as compared to a liquid.  The word vapor is used when the molecules can be put into the liquid state or the gas state by simple changes in temperature and pressure within the normal range of values found on earth.  its.  There is no difference between molecules in the gas state and the same molecules in the vapor state.  there is no difference between a vapor and a gas however, nitrogen is not usually labeled a vapor since it is not easily changed from its gas state to its liquid state.  By contrast water is labeled a vapor since it is really easy to change water molecules back and forth from gas state to liquid state.  Other properties of binary system plots will be explored in next month’s puzzle so please check in again next month. 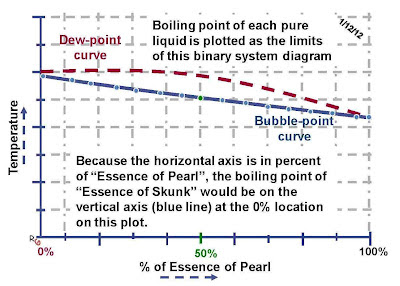