A technician has measured the boiling points of various liquids made by mixing different amounts of two “we-sell-smells” company secret perfume liquids. The first measurement was the boiling point of 100% pure “Essence of Skunk”. The last liquid measured was 100% “Essence of Pearl”. Fourteen other mixture boiling points are shown on the blue curve (the bubble-point curve).
In addition, the technician used a gas chromatograph to determine the percent of “Essence of Pearl” in the vapor just above each boiling mixture. That percent vapor (gas) data is shown as the red dotted curve (Dew-point curve). The technician knew that the smell of a small liquid drop of a perfume comes from the gas just above that liquid drop. Now, the technician knows a lot more about the behavior of the two secret perfume liquids when they become liquid mixtures with different percentages of Essence of Pearl.

Submit your answers right here, below this blog post, or on http://www.fl-ate.org/. 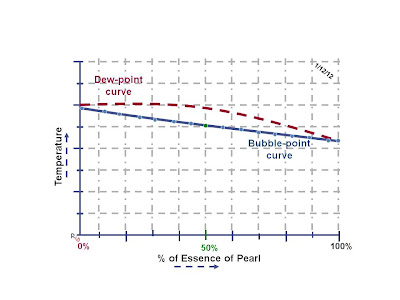