2002 was a significant year for ATE Centers of Excellence. Al Koller from Brevard Community College and Marilyn Barger were Principle Investigators for Space Tech and FLATE, respectively. In addition, Drew Hoff’s High School Technology Initiative project marked the beginning of a major effort to identify STEM (Science, Technology, Engineering and Mathematics) with the high school science and math curriculum. This project ultimately produced curriculum that was adopted by school districts in 13 states across the country, and provided professional development to over 600 teachers nationwide. Evan Kuharich’s project at the Florida State College at Jacksonville partnered with Gulf Coast State College to adapt and implement curricula developed by the ATE Advanced Integrated Manufacturing Center in Dayton, Ohio (AIM Center).

In 2003, Bob Williams from Daytona State College, continued his award winning efforts with the announcement that the Information Technology Education Center in Florida (iTEC) was to become an Advanced Technological Regional Center of Excellence in Information Technology. June Johns from College of Central Florida, received project funds to increase the number, quality, and diversity of prospective mathematics and science teachers through an interdisciplinary program undertaken through teacher training and pre-training activities. 2004 saw NSF-ATE investing in Florida’s engineering technology infrastructure. FLATE received continued funding as an ATE Center of Excellence with a major objective to install a statewide Engineering Technology A.S. degree program while Gsny Hawat from Valencia College, was awarded project funds to develop coursework for a new robotics and simulation specialization within its Electronics Engineering Technology associate degree program.

The second half of the first decade of this millennium accented NSF-ATE support of new technician issues developing within the state. St Petersburg College received grants to support a partnership between medical device companies and a group of community/technical colleges to form the medical device industry education consortium (MDIEC). Robin Willoughby from Indian River State College received ATE support to build a partnership with industry, government, high schools, and universities to meet the technician workforce needs of southeast Florida’s expanding biotech research industry. In 2010, Kevin Cooper, also at Indian River State College, received funding to address the fact that a significant percentage of the nuclear power industry workforce is close to retirement.

These last three examples merely emphasize the fact that Florida’s community and state college technician education programs are on top of the needs of Florida’s industry, and that NSF-ATE is right there, ready to help these colleges meet those community-defined workforce needs. NSF-ATE is committed to the education of the technician workforce in Florida. The program works in and for Florida, and all of the ATE Centers and projects funded in Florida have altered the way Florida prepares its technician workforce. Next month, we will just tweak (a technical term indicated a gradient adjustment) the knob on the “Way Back Machine” just a smidgen (at technical term used to indicate a small tweak) to see what happened last year.

For more information on the NSF ATE projects and grants visit www.fl-ate.org, www.atecenters.org, or contact Dr. Marilyn Barger at barger@fl-ate.org, and Dr. Richard Gilbert at gilbert@usf.edu.

Want to apply for an NSF grant? Enroll NOW for FLATE’s professional development workshop, or check out the announcements section on the blog! 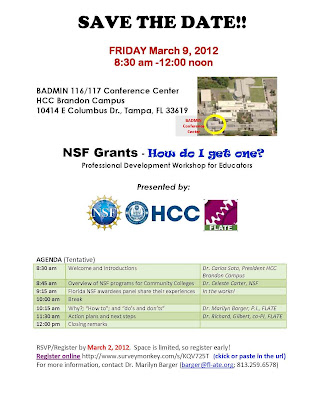