When you think of “Food Factor” chances are you’re not thinking LEGOs and robots. To strike a connection, FIRST Lego League took a leading step in 2011, and designed the “Food Factor Challenge.” Since its inception in September 2011, over 200,000 participants, ages 9-16, from over 55 countries have embarked on a journey to explore food safety, determine the cause and susceptible points for food contamination, and evaluate methods and solutions to prevent different forms of contamination. (Source: FIRST Lego League).

In all of this, where does the robotics factor come into play? Desh Bagley, CEO of Tech PlayZone and Director of the Suncoast FLL tournament says LEGOs and robots are mere “hooks” to get young people interested and excited about STEM (Science, Technology, Engineering and Mathematics). Bagley who has been involved with FLL through her company Tech PlayZone for the past six years played a pivotal role in facilitating the 2011-2012 regional FLL event. The tournament, held in January at Hillsborough Community College (HCC) at the Regent—the satellite campus of HCC in Brandon, brought together over 150 students not only from the greater Tampa bay region, but from Pasco, Pinellas and Orange counties.

Aptly termed as “Sports for the Mind”, the atmosphere was heavily charged as team enthusiasm soared high. Participants were divided into 16 teams, and presented with a two-fold challenge. The first portion was 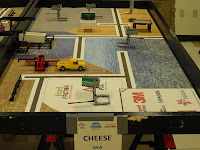 building, testing and programming a robot using LEGO® MINDSTORMS® NXT robots to solve a set of food safety missions. Coaches worked with individual teams on fine tuning engineering and programming components to build a robot using gear ratios, torque, force, motion and speed. Greg Verrill, teacher at Lomax Elementary School and coach for the Robo Panthers described the competition as a stepping stone to expose students from all backgrounds to robotics. He says being a part of the team helps students work cohesively as a team, to take on leadership roles, and also “helps fuel national effort to create an interest in STEM and engineering.”

The second portion of the game focused on researching, developing and sharing innovative safety solutions. Teams had to undergo a technical interview, talk to judges about their robot and programming concepts, and defend the individual theories and solutions behind their research. Kyle Coker and Hunter Dennis, 8th graders at Williams IB described the challenges as “a lot of fun.” Kyle, who aspires to be the “the next Steve Jobs, or Bill Gates” says what excites him about robotics is the opportunities. His fellow team mate Tushar’s take-home nugget lay in “winning is not everything…what matters is how you can apply what you learned to the outside world.”

Given the in-depth nature of the challenge, teams began working on their project in September 2011. For example, Williams IB Middle Magnet school in Tampa chose beef contamination 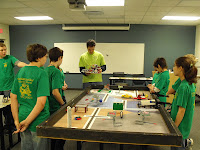 as their topic. Through research they learned that a Japanese scientist studied and found the bacteria killing effects of catechin, a compound found in tea leaves. The team discovered if the contaminated meat is placed together with the catechin in a basting bag, it kills the bacteria. The entire process is highly educational. “The main thing that today’s challenge has taught us is to work together as a team” said Duncan, a fifth grader at Lomax Elementary School who was animated about his experience. Duncan, who has set his goals high to be a NASA scientist says he likes STEM because it is logical, based on facts and has real world applications and implications. “I find myself looking forward to my math and science classes every day” Duncan said.

Indeed, the FLL competition has been an effective vehicle in not only cultivating a passion for STEM, but for sharpening leadership, teamwork, and communications skills. Kristy Weg, coach for Williams IB says being part of the FLL has helped students expand their knowledge about science beyond learning definitions and text book reading. “They get to see science as a conduit for solving problems, sparking new technologies and innovation that has real- world applications.” 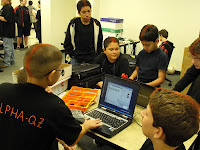 “Science is all about collaboration” notes Bagley. To that effect, the competition represented a cohesive partnership between various organizations like FLATE, TechPlayZone and Hillsborough Community College, committed to enhancing the understanding/appreciation of STEM and robotics. Bagley views FLATE as a “big brother” taking on a bigger lobbying role in reaching out to Hillsborough, Pinellas, Pasco school districts to offer similar programs for free, so kids who cannot afford will be able to avail of these opportunities. “These kids are our future. It is important for the upcoming generation to think past masters/doctorate. They need to be innovators for tomorrow.”

For more information about the FIRST Lego League and regional competitions visit www.firstlegoleague.org. For information on TechPlayZone visit www.techplayzone.com, or contact Desh Bagley at 813.684.7329. To enroll in FLATE’s robotics camps visit www.fl-ate.org and www.madeinflorida.org, or contact Dr. Marilyn Barger at barger@fl-ate.org.