President’s Request for Industry Credential Based 2 year Degree: A Done Deal in Florida!

On May 8, 2011, President Obama announced a goal to credential 500,000 community college students nationwide with skills certifications aligned to manufacturers’ hiring needs. Similarly, at the NSF Broadening Impact Meeting in Washington D.C., Jane Oates, assistant secretary for employment and training at the Department of Labor (DOL) called out to the nation’s community colleges to grant college credit for short-term workforce training. Oates said “short-term workforce training, which has historically not included college credit, and does not count toward degrees is “immoral.” The unified message from the pulpits of the White House and the DOL, to align workforce training with industry recognized credentials, is loud and clear!

These presidential directives that the nation needs two year degree programs which articulate industry recognized certificates is already a reality in Florida. Even before the big names in manufacturing first endorsed this system, FLATE took a leading step to embed the National Manufacturers 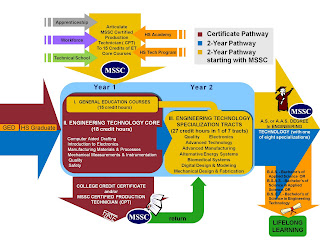 Dr. Marilyn Barger, executive director of FLATE says “FLATE was the first to establish alignment crosswalks, and wrote the first statewide articulation that allows anyone in the country to get 15 credit hours towards this A.S. degree if they hold a valid MSSC Credential.” FLATE has also put into place a high school program that is specifically aligned to the same certification, and can be used by high school students to enter the two year A.S. degree in Engineering Technology. Moreover, Dr. Marilyn Barger, via invitation from Emily DeRocco, president of NAM’s Manufacturing Institute, has been a member of the Manufacturing Institute’s Education Council for 2 years, primarily representing FLATE’s highly regarded statewide model, and as a conduit to other manufacturing centers. “It’s a kind of grass roots effort to get industry engaged; besides which, Florida now has the third largest number of MSSC CPT certified individuals in the country. Pretty good for a state that is not considered a ‘manufacturing’ state” Barger said.

The ET degree program conceived, engineered, and coordinated by FLATE was developed with funding from the National Science Foundation Advanced Technological Education Program (NSF ATE), and has been in place in Florida since 2008. The program represents a cooperative effort between the Florida Department of Education and FLATE, is a unified statewide approach to meet the needs of Florida’s hi-tech manufacturing industry, and represents a synergy which connects industry and workforce needs to college degree and certificate programs. 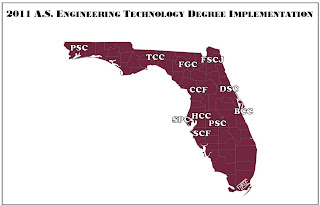