High School Students Get a STEMulating Taste of Robotics

Posted by SystemAdministrator
Stefan Dueck and Nate Greaves are hard at work, fine tuning their robot that they have designed, built and programmed to compete in the final day challenge of the “Industrial Camp” for

high school students. They have appropriately named their team “STEMulators” which they say is targeted to STEMulate passion for STEM (Science, Technology, Engineering, Mathematics). Dueck and Greaves share a thriving ambition to become mechanical and/or electrical engineers, and have attended each of FLATE’s robotics camps starting at the introductory level and progressing onto the high school camp.

Stefan, a ninth grader at Seffner Christian Academy in Tampa, and Nate, also a ninth grader at Durant High School in Tampa describe the camp as “real fun.” What brings them back each time, they say, is the motivation to learn. “At school you’re learning, but here you’re competing in challenges, having fun while learning, and at the same time expanding your knowledge about the career opportunities that are out there which makes it much more exciting than a regular school/classroom environment.” 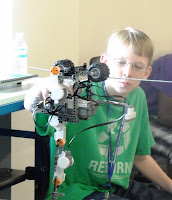 camp “fun” were the challenges themselves. Campers were presented with the “Cable Tram Challenge,” whereby each team worked in groups of three to design and program a robot to crawl across a cable wire/outcropping, pick up buckets and transport them back to a drop off location. To get the tasks accomplished, teams used basic programming skills, and followed each of the engineering design processes that require brainstorming ideas, designing, building, programming and testing their robots to perform at its optimum level. Teams also used the knowledge gained at the camp through hands-on training with programmable logic controls, robotic arms, and CCM machines to work through each step of the challenges. “The high school camp was much more challenging and thought-provoking and elevated our knowledge about robots and robotics technology” Stefan said.
Indeed what set the high school camp apart from the past two camps was its emphasis on real-world applications of robotics technology. Students got an opportunity to witness modern high-tech manufacturing operations at work while touring Sun Hydraulics—a designer and manufacturer of high-performance hydraulic cartridge valves located in Sarasota, FL. “It was the best tour yet” said Nate. “I learned about pneumatics that helps control robots, learned how to wire PLCs, and CPUs, and gained a better understanding about the technology behind some of the machines we use everyday like Ipads.” Stefan on the other hand said he learned about the making and functioning of machines, use of robotic arms, and design programs which he said was “cool” and “interesting.”

Allan Dyer, who helped develop curriculum of the camp, agrees the camp was not your average summer camp. In that, campers got a firm grip on key engineering concepts, its integration in robotic applications, and experienced first-hand the value of working within a team environment. Dyer, who has been the robotics camp instructor since the inception of the program in 2007 says “the teacher of today isn’t the teacher of yesterday who in most instances focused on lectures and notes.” Technology, he says, affords teachers a more hands-off approach, and makes way for greater level of self exploration and problem-based learning for students. 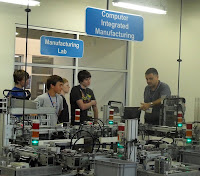 Dyer notes critical thinking, problem solving, and working in team environments are skills needed across all industries and in all professional environments. He says “one of the failing of our education system is we don’t stress enough on the importance of working cooperatively in group/team settings.” To that effect, he hopes the camp provided a deeper insight on soft skills, on the field of engineering, what it entails and offers, and more importantly will give students a competitive advantage in the long run regardless of their decision to pursue engineering/non engineering related fields.

The robotics camps are part of FLATE’s outreach efforts targeted to cultivate technical, leadership, professional and team-building skills. The project captures the interest of middle and high school students by following the current trend of robotic applications used throughout the entertainment media. The camps are also a fun and exciting way to sharpen students’ knowledge about STEM, and showcase its applications in everyday high-tech manufacturing operations. In addition to the high school industrial camp, FLATE offered two introductory level camps and an advanced camp this summer at Hillsborough Community College in Brandon. As part of a wider effort, the Center partnered with College of Central Florida (CCF) and Florida Gateway College (FGC) to offer similar camps in Ocala and Lake City. Safety Harbor Elementary School in Pinellas County also hosted a FLATE-based robotics camp over the summer.

For more information on the camps visit www.madeinflorida.org/camps-workshops, or contact Dr. Marilyn Barger at barger@fl-ate.org, and Dave Gula at gula@fl-ate.org.