It was a summer to remember! Away from the scorching heat of the mid-Florida sun, this year a handful of students chose a “cooler” option for part of their summer. More than 60 middle school students flocked to the Brandon campus of Hillsborough Community College to be part of the annual r 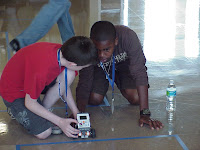 obotics camps hosted by FLATE. The week-long camps were held in July and August, and involved local middle school students from Orlando, Tallahassee, and even Las Vegas.

There were a lot of oh’s! and ah’s! during the final day of the competition as students and their parents watched the robots make a turn, respond to a loud clap, or veer off the course marked in blue tape on the lab floor. The challenges were fun and educational on multiple levels. They focused on different aspects of robotics technology, and gave campers hands-on knowledge about programming robots by working directly with the software. Austin Lukas, who attended the first week of camp said “The challenges made me think outside the box”.

The challenges also enhanced campers’ understanding of science, mathematics, engineering and technology (STEM), and helped cultivate leadership and team-building skills. It expanded their knowledge about the products that are “made in Florida”, steps involved in the manufacturing process, and provided insight about lucrative STEM-related career opportunities. Ja 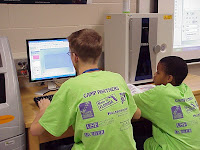 red Kersman, who also attended the first camp, said “I will remember all the hard work involved in programming a robot, and the “Made in Florida” video that talks about industries and later jobs.”

FLATE’s robotics camp also served as a model program for Central Florida Community College as part of its effort to offer similar camps in future. Ed Niespodziany, professor of business and technology and program manager for the engineering technology degree at CFCC who came to observe the camp for an entire week said “The FLATE robotics camp provided an in-depth and clear perspective in designing and offering age-appropriate challenges.” He was impressed by FLATE’s attention to safety, and the camp’s curriculum model which kept students engaged—essential components given the age of the participants. Neispodziany is “looking to plant the seeds of interest in STEM education at an early age”, and hopes to offer a similar camp for middle school students next summer in Ocala. “Our best chance is to capture students’ interest while in middle school so they can continue to explore and expand their interest in STEM education” Neispodziany said.

d in EDG 2701—Teaching Diverse Populations—a summer course offered at the Dale Mabry campus. Apart from fulfilling a 15-hour observation component for the course, the camp gave the students an opportunity to witness the success and failure of young teams facing challenging tasks. One of the students, Lia Thornton, also made a PowerPoint presentation highlighting the overall camp activities and the challenge winners.

Indeed, the robotics camps were a fun and challenging way to capture students’ interest in STEM education by integrating them in a robotic platform. As one parent rightly noted “My child really enjoyed this (jumped out of bed). I hope this can be offered again next year for more weeks so more ‘future engineers’ can benefit.”

For more information on the robotics camp contact Dave Gula at 813.259.6581/gula@fl-ate.org. To view a clip of the robotics camp that was featured as part of the morning newscast on WTVT-Fox Channel 13 in Tampa visit www.fl-ate.org/news.