Season for Sports for the Mind Sizzles with Regional Robotics Competitions

As football season is heating up, line-up of robotics competitions in the region are also warming up. FLATE

will be sponsoring a number of local robotics teams. The 2013-2014 robotics season starts with FIRST LEGO® League (FLL) qualifying round of tournaments in November and lasts through January, 2014.There are over 500 teams registered in Florida. The FLL challenge is based on a real-world scientific topic.

Research theme for this year is “natural disasters.”

Each challenge has three parts: the Robot Game, the Project, and the FLL Core Values. Teams of up to ten children, with one adult coach, participate in the Challenge by programming an autonomous robot to score points on a themed playing field (Robot Game), developing a solution to a problem they have identified (Project), all guided by the FLL Core Values. Teams may then choose to attend an official tournament, hosted by one of our Operational Partners. An official listing of qualifying tournaments are listed on the Florida FLL website http://flrobotics.org/tournaments/QualSched.html.

February. The Kickoff for local FTC was September 21st at Middleton High School for the Tampabay Area teams. Middleton High School has FRC, FTC, and VEX. The FRC and FTC teams have had their kickoff meetings and are adding new team members. FIRST® Tech Challenge (FTC®) is a mid-level robotics competition for high-school students that helps them learn to design and build robots with both driver and autonomous controlled behavior.  FTC robots are built with the TETRIX® or MATRIX® robot kits and are controlled by the LEGO® MINDSTORMS® NXT Robotic System with a choice of 2 software platforms; ROBOTC or LabVIEW. Student teams develop robots that can perform the tasks defined in the Challenge, then compete with, and against, other teams in qualifying competitions and a state championship. The purpose of FIRST Tech Challenge is to give high school age students an opportunity to experience the fun and excitement of complex problem solving in a positive and supportive team environment. Visit the FTC web site for more information.

Kick-off for FRC 2014 (FIRST Robotics Competition) starts in January. FIRST Robotics Competition (FRC) has been referred to as the super bowl of the mind. Over 2,500 teams compete worldwide in an annual challenge where each team must each build a remote controlled robot out of a standard kit of parts. The 2013 FRC South Florida regional will take place on March 28-30 at Fort Lauderdale Convention Center in Fort Lauderdale, Florida and is expecting between 45 to 50 teams.

kick off for BEST robotics competitions across the state. Nearly 100 robotic enthusiasts showed up at the HCC Brandon Campus in October with 12 HCPS teams lining up at the starting line for the 42 days of BEST Robotics Competition. Eleven of the teams are led by HCPS science teachers plus the 12th team of the heavily favored All Girls team, Brandon Vibots composed of alums from the McLane robotics engineering club. This year’s BEST Competition theme titled, GateKeeper, is focused on building of a 32 bit CPU using logic gates. BEST tournaments are scheduled for Nov. 1-2 at Lennard High School in Ruskin, FL. 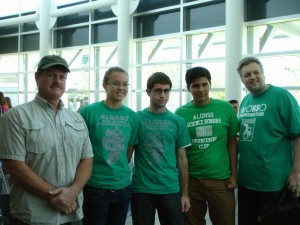 Additionally FIRST Coordinator Terri Willingham is promoting a Robocon, and various VEX tournaments are also being organized across the state. For more information on robotics competitions happening this Fall and Spring visit www.fl-ate.org, or contact Desh Bagley, outreach manager for FLATE at bagley@fl-ate.org, and Dr. Marilyn Barger, executive director of FLATE at barger@fl-ate.org.