Posted by SystemAdministrator
Relevancy of robots in industrial and everyday settings is undeniably apparent. Today robots don’t look, nor act like the machines of yesteryears. The “in” thing these days is “humanoid robots.” It may be a very 21st century concept, but it is an evolving term that speaks of the here and now in terms of how robots have come to assume and assert an identity of their own. Now more than ever robots display higher degree of humanistic characteristics, and are capable of reflecting higher level of human emotions like reading to autistic children, or serving as companions for the elderly, or conducting high risk operations for law enforcement officials venturing into territories restricted to humans.

Indeed robots are everywhere, and there is a national as well as regional “push” to get students and the 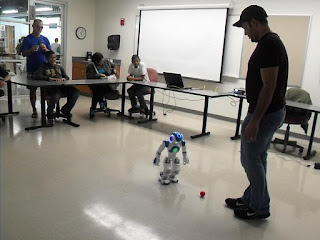 community at large engaged in STEM using robotics as a common platform. Given this trajectory in latest technological trends, FLATE—the National Science Foundation Center of Excellence in manufacturing at Hillsborough Community College—recently partnered with local engineering and robotics clubs in Tampa bay to celebrate national robotics week. The event was featured in National Robotics Week calendar, and showcased the various dimensions of robots and robotics technology at play. Robots project a fun side of engineering, says Juan Calderon, an electrical engineering student conducting research at the bio robotics lab at the University of South Florida in Tampa. Robots serve as a “hook” in helping steer students’ interest in science, technology, engineering and mathematics (STEM), said Juan. He, along with his fellow researcher, Johann another USF student who will also be serving as a robotics instructor at the FLATE robotics camps this summer, were in charge of the NAO robot—a humanoid robot—interactive demonstration at the robotics open house.

FLATE’s robotics open house served as a hotspot for STEM and robotics enthusiasts and brought students, educators, parents and industry professionals from across the Tampa bay region. Julia and Dillon 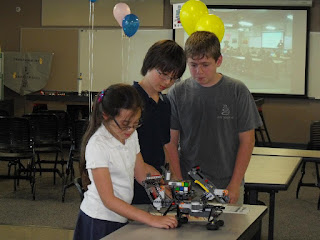 Perrigault-eng, were among those who were excited seeing the NAO robot in action. “Robots are cool” said Julia. Dillon who aspires to be an engineer says he loves robots as “they can be programmed to do anything humans want them to do.” Haven Rubellios and Mya Arong, 5th graders at Morgan Woods Elementary school were excited to see robotics at play. “We’re like little engineers building robots, problem solving, and working as a team” Mya and Haven tried their hand at the bottle touch challenge, and learned about rotations, speed and distance which they say will help while competing in regional robotics competition later in the year. Trey and Bradley share a similar opinion about robots. “I have always loved robots, and want to build one when I grow up” said Trey. Bradley and Trey who plan on attending FLATE’s robotics camp this summer says the open house gave them a chance to see how to build electric cars, their engines, and learned about 3D printers. The fun part of their day, they said, was watching the robotic arm, which according to Trey has real-world applications in terms of using for excavations and deep sea explorations.

The robotics open house was an educational experience, not only for first timers, but for returning campers like Colton Lewis. “Robots have always fascinated me. Programming is challenging but fun.” Colton who wishes to pursue a career in engineering for the military, has attended all of FLATE’s robotics introductory and advanced camp. He says the experience helped him understand advances in technology and the options that are available to him, and developed problem-solving and critical thinking skills which according to Colton are “keys to succeeding in STEM.” He is currently enrolled in FLATE’s high school camp this summer, and recently won the Florida state STEM fair competition.

In addition to the NAO robot demonstration, attendees also got to see first-hand use and integration of 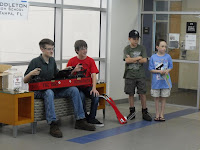 robotics/robotics software used by robotics FLL, FTC and FRC teams from local schools. Graham Peterson and Daniel Brown showcased the robot they built for the regional FIRST Robotics Competition (FRC). “We used a lot of industry level electronics to build the robot” said Graham. For programming, they used C++, for drive train they used a four, six wheel set-up. Each of the wheels had a roller on it, with a vector at 45 degree angles so they could effectively maneuver speed and direction.

Graham and Daniel, who are members of the robotics club at Middleton High School and have attended robotics camps from introductory through high school level camps, agree “technical skills are central to any engineering field.” Being part of a larger network of robotics teams have not only helped sharpen their understanding of electronics and programming, but have also helped them strategize and work effectively as a team. They hope their demo will inspire similar interests among fellow students attending the robotics open house to develop/sharpen their technical as well as leadership skills, and motivate them to join local/regional robotics team.

Not to leave parents and educators out, the robotics open house had much to offer to those on the 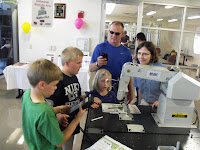 other side of the continuum. Kristy Long and Carissa Brady teachers at Morgan Woods elementary school in Tampa said the robotics open house gave them “insight into the possibilities,” and what they as educators can do with knowledge of robotics. “Exposure to these technologies equips students with the skills needed for the future workforce” said Kristy. “It develops critical thinking skills, and helps students’ understand real-world applications of what they are doing in class” Carissa said.

Fonda Moore, a career counselor for a local school in Tampa agrees STEM-focused jobs tend to pay higher salaries, and is currently in high demand for skilled/qualified professionals. Moore who was attending FLATE’s open house with her son Julian Moore applauds FLATE and HCC for making these resources and opportunities available to the local community students, educators and parents. STEM jobs are not so much hands-on, as they are minds-on, says Moore. “These jobs help students advance career wise, teaches them life skills as it keeps them stimulated and is the way of the future” Moore said.

For more information on FLATE’s robotics program, contact Dr. Marilyn Barger, executive director of FLATE at barger@fl-ate.org. To enroll in one of FLATE’s, STEMulating robotics camps this summer contact Desh Bagley, outreach manager at bagley@fl-ate.org, or visit www.madeinfolorida,org and www.fl-ate.org.