Governor Rick Scott is delivering his message, Manufacturing Matters, in a variety of ways. For FLATE this is an important message and strikes a chord with FLATE’s essence. However from our perspective, there is another important element in the Governor’s action. His choice of venues for announcing important policy that affect manufacturing is a point of pride for FLATE.

Two quick examples:First, in the fall of 2013, the Governor presented a challenge to the state college system to create a $10,000 college degree pathway to provide a practical education that gives graduates the knowledge and skills to meet industry needs. He introduced that call to action at a press conference at St. Petersburg College with that announcement also including a press accompanied detailed visit to the College’s manufacturing innovation center. Naturally, this new education action is important to FLATE, but we are, to borrow a phrase from the Herbert Humphrey (the late Senator from Minnesota and vice president of the United States), “proud as punch” that he chose St. Pete College to launch this new initiative.

Second, last month, the Governor made a major announcement about the changes in Florida tax code that have a positive, directly and immediate impact on Florida manufacturers. His chosen venue for this announcement was the Advanced Manufacturing Center at Tallahassee Community College. Again, the press conference included an up front and personal, with press in tow, and tour of that great facility.

So, what’s the FLATE Focus interest? Besides the fact that Florida is beginning to focus on supporting manufacturing and manufacturing supportive education, there is the really warm feeling that the Governor picked two very strong FLATE partners to launch the public awareness phase of his efforts. Both colleges are strong supporters of the A.S. Engineering Technology degree as well as FLATE and its mission. Hat’s off to Bruce Batton and Rick Frazier at TCC and Brad Jenkins at St. Pete College for making their ET programs the drawing points for the Governor’s announcement location options. To add to our bragging right, FLATE is not too shy to take a bit of the kudos for its role in supporting manufacturing education that is now prominent in these and 14 other state and community colleges in Florida that offer the ET degree. 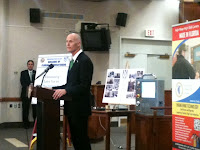 In closing, check out the banner on the right side of the Governor photo. You got it! That is indeed a plug for FLATE’s “Made in Florida” campaign. Thus, in the words of the A-Team, “Don’t you love it when a plan comes together!” We sure do!